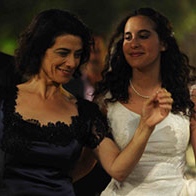 Long-hidden secrets are revealed as a Palestinian family gathers for a wedding in Gallilee, in the north of Israel. Daughter Hajar (Hafsia Herzi), youngest sibling of five, has come home from studying abroad with an Anglo-Saxon, Christian boyfriend (Tom Payne). If that wasn’t enough, when patriarch Abu Majd (Makram Khoury) drops into a coma, there’s a clamor to sort out his legacy and open hostilities begin; while the war between Israel and Lebanon is in the backdrop of this one family’s battlefield. The directorial debut of popular Palestinian actress Hiam Abbass (Munich, The Syrian Bride), Inheritance announces the emergence of a major new directorial talent. 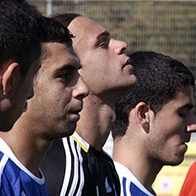 Telling the stories of two teenage soccer players, Yisrael Agos and Mahdi Zouabi, Green Dreams shows the profound personal and financial sacrifices that are required to have even a shot at an athletic career. Yisrael dreams of playing midfield for Champions League powerhouse AC Milan, while Mahdi aspires to be a goalie for the Israeli national team. Yisrael, who lives in a boarding school, is of Ethiopian descent, but has practically been adopted by an Israeli man who always wanted a soccer player for a son, and who now neglects his own sons for Yisrael. Mahdi lives with his own father, who has a single-minded obsession with making his son into a pro and whose idea of encouragement is yelling things like “I don’t like to be humiliated” from the sidelines. With its full-exposure look into relationships beyond the locker room, Levi Zini and Gil Edni’s film is nothing less than an Israeli Hoop Dreams. 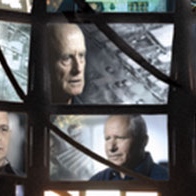 The Academy Award nominated documentary, the Gatekeepers, was based on a five hour TV series, following six former directors of the Israeli Secret Service Agency, sharing their insights and reflect about their decisions. Director, Dror Moreh will introduce the TV series’ US premiere. Join us for the special presentation of an episode followed by a conversation with the director. 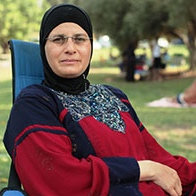 To Jews it’s the Gan HaShlosha National Park. To Arabs it’s the Sahne. In this widely-lauded documentary, however, it’s the eponymous Garden of Eden. A funny, generous document of the park—a popular getaway for Israelis from all walks of life—through the seasonal changes of one year, an introduction to some of the park’s regular visitors, a host of fascinating individuals. There is a recent divorcee, a woman who has faced untold trials since her marriage as an adolescent, a man planning to emigrate from Israel, and another traumatized by his brother’s death in war. Christians, Muslims, Jews, and atheists are here, united in their humanity, and the result is a testimony on the vibrant diversity of Israel, often mistakenly simplified into two monolithic poles. 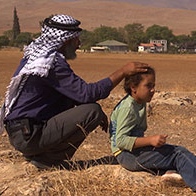 Israel’s Jordan Valley is one of the country’s most fertile regions—but today that natural bounty isn’t shared equally. The Palestinian farmers now work land that has become desert because of a “drought” caused by deliberate decisions. The proud farmers who remain discuss their way of life as it slips away: Wells go dry as water is siphoned off by Jewish settlers; shepherds’ grazing pastures are annexed by the military. Robbed of their traditional livelihood, many farmers must abandon their treasured independence for menial, low-paying work in cities and neighboring settlements, where the always freshly-watered lawns provide a mocking commentary on inequality. 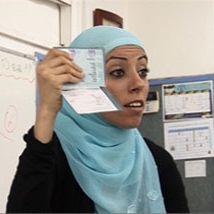 Hadeel, a lively 27-year old Arab teacher from Israel’s Wadi Ara region teaches spoken Arabic to a sixth-grade class at a Jewish elementary school as part of “a cross-cultural outreach program.” . The camera follows Hadeel over a year, during which she faces casual prejudice at work and mounting pressure to marry at home. While Hadeel remains convinced she can make a difference and moments of curiosity and dialogue with her students and co-workers offer reason for optimism, in candid conversations with the camera and her sister, Hadeel confesses fears and doubts. A humane and even-handed film about communication at any cost. 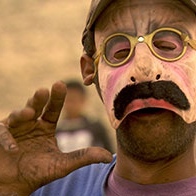 For those living in the Israeli settlements around the southern West Bank, the Hebron Hills garbage dump is just a place where trash goes and is forgotten. For the hundreds of resourceful Palestinians in the nearby city of Yatta, however, that trash is a treasure, a way to feed their families, a way of life. Directors Shlam and Ushpiz fix their camera on these scavengers who live off of prosperity’s cast-offs, men and boys who brave deplorable conditions and Israeli soldiers to rummage through the trash for material that has a second life—scrap metal, old clothes—and which might bring their families incrementally closer to a better life. A portrait of shared striving which narrows to unforgettable individual stories, using an oblique approach to highlight the vast disparities of wealth in modern Israel. “A truly blood-chilling… excellent film.” —Haaretz 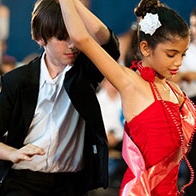 How do you foster understanding between Jewish and Palestinian Israeli youths raised in distrust of one another? Renowned dancer Pierre Dulaine, born in Jaffa to an Irish father and Palestinian mother, proposed his own unique solution: Ballroom dance! Hilla Medalia’s documentary looks in on five grade schools in Dulaine’s hometown which have agreed to host his “Dancing Classrooms” program. Focusing on Dulaine, three of his program’s participants, and a teacher at one of Jaffa’s rare “mixed” schools, Medalia documents the ten week build-up to a final competition that demands teamwork between the 11- and 12-year-old dancers of integrated Jewish-Palestinian backgrounds. Variety called this festival favorite “uplifting” for its illustration of how a craft can build self-esteem and how cooperation can blow down walls of prejudice, while The Jerusalem Post dubbed it “Mad, Hot Ballroom with a Middle Eastern twist.” 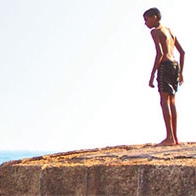 The Northern port city of Acco (Acre) is a mixed (Jewish-Arab) city. The city’s Palestinian population—both Muslim and Christian, and for the large part “Palestinians of 1948,” who were the residents of Israel when it was granted statehood—has been there for generations. As Akko has become an increasingly-popular tourist destination, however, there has been a concerted push to change the long-standing demographics, resulting in a government-backed push to move Palestinians out of the Old City. In the hands of the filmmakers, a traditional rite of passage in Akko, the act of jumping from the ancient 40-foot seawall, becomes a metaphor for the perilous situation and great bravery of the city’s Palestinian population. A tough, deeply empathetic film that may suggest uneasy parallels between subtler gentrification, as we know it, and actual forced relocation. In theaters Nov. 22. 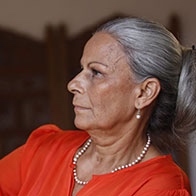 Layla, a sixty-something, Egyptian-born woman has had multiple failed attempts in passing her driving test, but her last best chance is with Nimar, the top driving instructor in Jerusalem, whom she begins practicing with. The lessons turn into cathartic confessions as Anat Zuria’s crew tags along to watch the lessons and catches Layla, recounting the story of her life—her family in Egypt in the midst of a revolution, her broken marriage to an abusive husband and the struggles of her children, particularly her daughter, Hagar, who is preparing to marry a Jewish man. The Lesson is a major new work from Zuria, whose previous films Sentenced to Marriage and Black Bus explored the prohibitions faced by women in Israel, and who Haaretz called “one of the most riveting women in the local film world.” 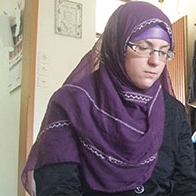 Like any devout Muslim, Maor goes to the mosque, studies the Qu’ran, and prays towards Mecca five times a day. But there’s something which sets Maor apart – she was born May Davidovich, to a Jewish family in a small Israeli town called Karmiel, and converted to Islam when she was 18 years old. Mom, Dad, I’m a Muslim picks up four years later, when Maor has begun to look for a husband who’s observant of her adopted faith. This informal domestic portrait illustrates Maor’s plight of being torn between two worlds, longing to find a place in the Arab community while dealing with the shunning she faces from her own. Maor and her family’s journey towards a new synthesis, illustrated in humble everyday moments, is a testament to the triumph of human values over institutional walls. 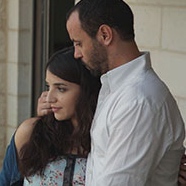 Under The Same Sun
2013 | 84 Minutes minutes | Themes: Narrative
Director: A project of Search for Common Ground

An optimistic techno-Utopian vision of things as they might be, Under the Same Sun imagines the origin of peace between Israelis and Palestinians in the simple collaboration of two businessmen from clashing cultures—Palestinian Nizar (Ali Suliman) and Israeli Shaul (Yossi Mar). Nizal and Shaul’s partnership is uneasy at first but, as trust gradually grows through the revelation of common experience, they become an efficient unit. Working together, they produce a solar power breakthrough that provides energy to Palestinians in the West Bank and, eventually, use Facebook to launch a landmark peace campaign. Created by a Palestinian director and Israeli producer and made under the auspices of Search for Common Ground, the circumstances of Under the Same Sun’s production mirror its subject matter—meaning that this near-future science fiction doesn’t necessarily need to be fiction.

What About Me
2013
Director: Etgar Keret & Shira Geffen

The Other Side
2013
Director: Khen Shalem 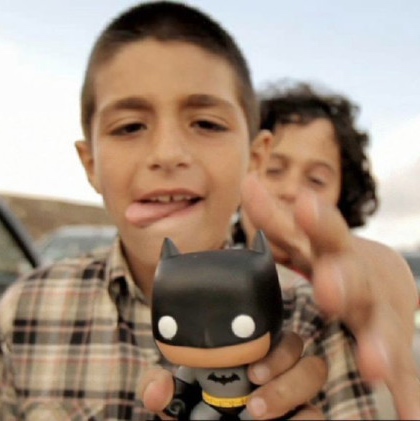 An Israeli car and a Palestinian car are stuck in traffic in front of a barricade at the entrance of Jerusalem, coming from the Dead Sea. Yuval and Mahmoud, both seven years old boys, find its much more fun to pass the time playing with one another. But when Mahmoud’s father tries to cut into the other’s lane, Yuval’s father bumps into his car in an attempt to prevent him, and things start to get complicated. What began as a game becomes an outright battle over a plastic Batman doll. 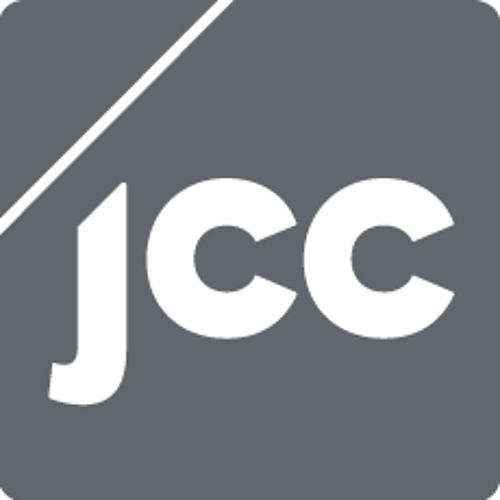 In this family friendly selection of new short films, Etgar Keret and Shira Geffen tell the story of a man trying to cross a checkpoint with his donkey, two kids fight over Batman, a boy attempts to play soccer with kids from the otherside, and OneVoice presents two films with a vision of Israel in 2018. 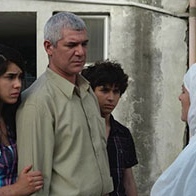 Arabani isn’t just the auspicious debut feature of a new talent in writer-director Adi Adwan—it’s also the first feature film ever made by an Israeli Druze filmmaker. Newly divorced from his Jewish wife, Yosef (Eyad Sheety) returns to his hometown, the Druze village of Sumaka. While eventually mending bridges with his mother (Zuhaira Sabbagh), the community as a whole gives a cold-shoulder response to Yosef and his mixed-race teenaged children, daughter Smadar (Daniella Nidam) and adolescent son Eli (Tom Kelrich), who face ostracism, misunderstanding, and intimidation. Deploying an understated, nuanced style, Adwan slowly, confidently unspools his story, detailing the slow erosion of social and emotional barriers and budding of young romance. Adwan’s intimate knowledge of his people’s way of life is evident in every precise domestic detail which, in an accumulation of small moments, builds to make a film of surprising emotional impact 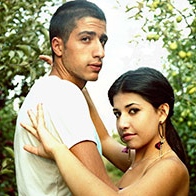 Since the Golan Heights passed from Syria to Israel in 1967’s Six Days War, only a few of the region’s Arab villages remain proudly, stubbornly intact. Documentarians Jill Beardsworth and Keith Walsh look at one of them, a community of Druze apple farmers whose crops, along with prospective brides, are among the only items freely exported from Israel to Syria. Particularly vital in light of current events in Syria, Apples of Golan captures the schism between an older generation, born in Syrian Golan and loyal to Bashar al-Assad, and a younger generation, born in Israeli Golan with “Undefined” citizenship and unsure loyalties.

The Garden of Eden

It's Better to Jump

Under The Same Sun

Batman at the Checkpoint

Apples of the Golan